In Season 7 of Game of Thrones, we had an unexpected guest: Ed Sheeran. The cameo didn't go over so well, and one of the actors on the show even admitted he wasn't a fan.

Kristian Nairn, who played Hodor until Season 6, said in an interview on Wednesday that he wasn't into the HBO guest appearances. "I'm not a fan of the cameos in Game of Thrones," he told HuffPost. "I don't like them. I think it's stupid. I don't mind going on the record on that. I just think it takes you right out of the world."

"Especially Ed Sheeran," he continued. "I was like, 'Why is Ed Sheeran here?' I mean, Ed Sheeran's great. He's a great guy, great musician, but why is he in Game of Thrones?"

"I'm not saying I'm not a fan of Ed Sheeran," Kristian clarified. "But just not a fan of the cameo. I think most people would agree with me there. It was a big snap to reality. It's like, 'What? What?' ... 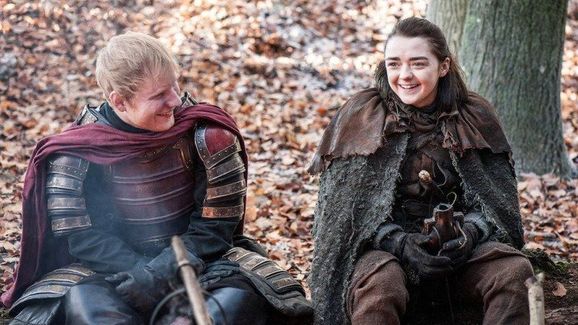 "We were all quite young, those soldiers. I doubt I'm going to survive for that long, to be honest, when there are dragons in the world...